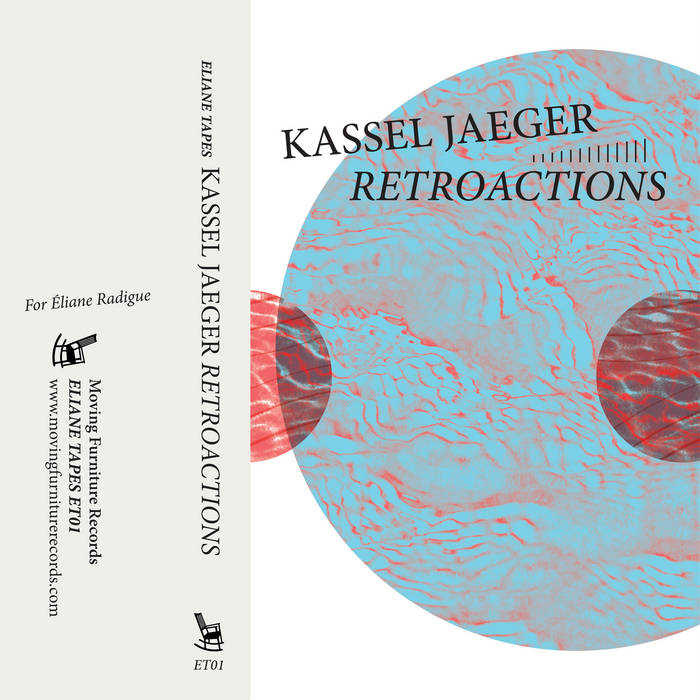 Eliane Tapes is a new series on Moving Furniture Records. All the music in this series is dedicated and/or inspired by the works of Éliane Radigue.
With her groundbreaking work already in the late 60’s and early 70’s Eliane Radigue created a path for many other musicians in the field of minimalism and drone music.
To celebrate the amazing work she has done, and still does, we ask musicians to create works that are inspired by her work and as such are a dedication to her.

For Retroactions Kassel Jaeger created “studies” trying to extend the gesture Eliane Radigue did with feedbacks, with a different and more “hifi” setup than the one she used at the time.
In 4 studies he experiments with different feedback setups, controlled, non-controlled, processed and non-processed. He worked with 6 microphones and 10 speakers, feedbacks.

About Kassel Jaeger:
Kassel Jaeger is the project of Paris based musicians and composer François Bonnet, who is also the artistic direct at GRM. He has released multiple albums the past 11 years on labels such as Editions Mego, Senufo Editions, Unfathomless and Mystery Sea.
Aside from this he has also written several books on philosophy, science and music including the highly acclaimed “The Order Of Sounds”.

All music by Kassel Jaeger
Artwork by Isabelle Vigier

Eliane Tapes is a series of music dedicated to the vast amount of work and the huge influence by Éliane Radigue, released by Moving Furniture Records.

All music is released on cassette tape in an edition of 100 copies and digital.

SHIPPING TO AUSTRALIA IS AT THE MOMENT NOT POSSIBLE :-( ... more

Bandcamp Daily  your guide to the world of Bandcamp

MF DOOM is given his flowers, plus appearances from MC Jada Imani and Stanley Ipkuss